Skin infection by fungus is very common in our country due to warm and humid climate. Dermatophytes are the fungi that digest keratin and infect skin, hair and nails. (1) Occlusive clothing, frequent skin to skin contact and minor trauma of competitive wrestling create an environment in which dermatophyte flourish. (2) Although any dermatophyte can cause tinea corporis but the most common is Tinea rubrum.

Tinea corporis or ringworm is a fungal infection of trunk and extremities characterised by itchy, annular lesion with scale across the entire erythematous border. (2) Lesion are usually asymmetrical and may be single or multiple with well-defined margin and central clearing. (3)

A 24 year old male patient came with the complaints of severe itching and eruptions all over the body with redness and burning, especially at night and while undressing since 1 year.

It initially appeared on thigh and gradually appeared on whole body. Patient took external application by himself which reduces the complaints for some period of time but it relapsed again and again.

Mother is suffering from DM2, hypothyroidism

Patient was mild and gentle in talking, whatever he was enquired, he replied gently and calmly. He used to suppress his anger and wants always to be consoled while he was angry++. He wanted to be alone always and didn’t wish people to be around him. He was afraid of water, drowning as he doesn’t know swimming.

While enquiring about the physical generals, it was found that his appetite was good and liked to take cold food. His tongue was thick, flabby, slight red tip and usually drank 2-3 glasses of water in a day. He desired to take spicy food++ and often took while he returned from his business. He could not bear sunlight which caused severe itching. His stool was satisfactory and 1 time in the morning and urine was also normal. Patient used to sweat profusely on his face and back. He was sensitive to cold. He usually slept 6-7 hours with covering the face and on abdomen. All of his complaints were relieved in open air.

Diagnosis is based on clinical history and physical examination. (2)

Analysis and evaluation of the case

8 symptoms which are prominent mental, physical and particular symptoms are taken into consideration and repertorisation is done with the help of Complete Repertory in HOMPATH CLASSIC 8.0.

Pulsatilla nigricans (5) (6) was finally selected as per the mental symptoms of the patient as he said he wants to be alone always and does not want anyone around him; and consolation makes him better while he is an angry and during narration of his complaint he seems so calm and composed which is a characteristic of Pulsatilla nigricans.

Selection of dose and repetition

As already mentioned in aphorism 161 and aphorism 248 of 6th edition by Master Hahnemann that there is no apparent increase in original disease during treatment with renewed dynamisation (50 millesimal potency) and also may be repeated daily for months respectively (7), So 50 millesimal potency been selected seeing the intensity of symptoms.

Patient was advised to clean the clothes daily and take nutritious diet.

As a homoeopath, one must rely upon the totality. Homoeopathy is holistic science, so, in order to bring out proper homoeopathic treatment, thorough case taking is essential considering both physical and mental causative factors of the patient. Lastly, in chronic cases, constitutional remedy gives better results.

Dept. Of Organon of Medicine,

Abstract: The most common diseases encountered by health professionals are those associated with... 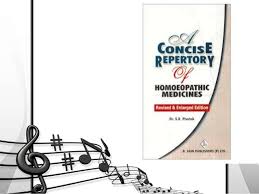 Hahnemann in his initial literature works mentioned about centesimal scale and prescribed this...