Alcohol is a CNS depressant. About 45 to 50% of adults are current drinker, 20% are former drinkers and 30 to 35% are lifetime abstainers. For most drinkers, the frequency and amount of alcohol consumption does not impair physical or mental health or the ability to safely carry out daily activities. Alcohol is a habit forming substance. When a person starts drinking, it slowly becomes a habit which is difficult to quit. Drinking alcohol does not produce any benefit for the person who drinks it except a temporary feeling of euphoria and being free of inhibitions. On the other side it produces many harmful effects on the person’s health, family as well to the community.
In 2067-2025 B.C., the King Hammurbai of Babylonia, popularised the sale and consumption of alcohol. The word ‘alcoholism’ was first introduced by Magun Huss. The word ‘alcohol’ was derived from Arabic word “Alkhul” meaning “essence”. Historical evidences suggest that alcohol consumption has been acknowledged as a part of different civilization. There are also evidences that alcohol has been a source of medication and ritualistic entity in certain religious ceremonies. The type of alcohol beverage, the quantity of its consumption, the pattern of drinking and the frequency of its use are constantly evolving. However, the matter of the fact is that alcohol is everywhere today.

CAUSES OF ALCOHOLISM: The maladaptive pattern of drinking that constitutes alcohol abuse may begin with a desire to reach a state of feeling high. Some drinkers who find the feeling rewarding then focus on repeatedly reaching that state.
– Many people, who abuse alcohol chronically, have certain personality traits; feeling of isolation, loneliness, shyness, depression, dependency, hostile and self-destructive impulses and sexual immaturity.
– Alcoholics may come from broken home and have a disturbed relationship with their family
– Societal factors – attitudes transmitted through the culture or child rearing- affect patterns of drinking and consequent behaviour.
– The incidence of alcohol abuse and dependence is higher in biologic children of people with alcohol problems than in adoptive children.
– There is evidence of genetic or biochemical pre disposition, including data suggests some people who become alcoholics are less easily intoxicated i.e. they have increased threshold for CNS effects.

Pathology of alcoholic dependency: 4 distinct phases are present
1) The pre-alcoholic symptomatic phase – Person starts drinking as conventional social situations and soon experiences relief from tension. As the time passes, tolerance for tension decreases and almost daily alcohol consumption begins. Transition may take several months to years.
2) Prodromal phases – This phase is marked by the sudden onset of blackouts, the drinker may show signs of intoxication and may be able to carry on a reasonable conversation or go through elaborate activities but will have no memory of it. Certain correlated behaviour like surreptitious drinking, preoccupation with alcohol, avoid drinking, guilt feelings and avoidance of references to alcohol.
3) Crucial phase – It is characterised by the loss of control over drinking mean that consumption of alcohol seems to trigger a chain reaction that continues until either sick or intoxicated. Begins to drop friends and jobs which lead to isolation and further centring of behaviour around alcohol. It can further lead to stage of complication as improper nutrition and “alcoholic jealousy syndrome”. As he becomes a morning drinker, he enters the chronic phase.
4) The Chronic phase – Finds himself intoxicated. There is also marked impairment in thinking process.

Metabolism and Absorption of Alcohol – Image 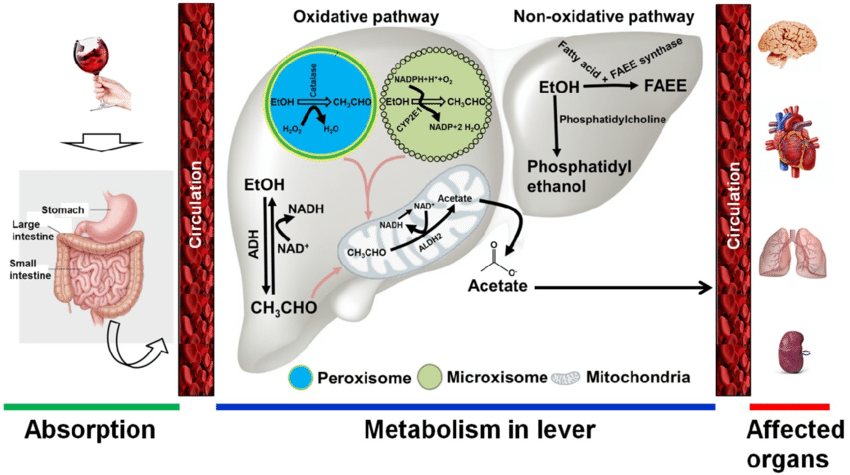 Clinical Features – Early warning sings include increased consumption, frequent desire for alcohol, extreme behaviour and morning drinking. It interferes with the ability to socialise and work. Injuries are common. People may be arrested because of alcohol related problems or apprehended for driving while intoxicated. Interesting phenomena seen are Hangover, Blackout and increased sexual stimulation but decreased sexual performance.

Homeopathic medicines provide promising results in cases of both Alcohol addiction as well as Alcohol withdrawal. Homeopathy ensures that the person is relieved from his or her sufferings completely with minimal chances of recurrence. Not only it relieves the immediate symptoms, it also works to heal the underlying cause, whether inherited, acquired, emotional or psychological and gradually helps the patient to restore his health. Homeopaths tailor their treatment to the individual alcoholic. Homoeopathic treatment has a beneficial role in managing patients with acute alcohol withdrawal symptoms as well. Observational studies of homoeopathic intervention for AD also directs toward its usefulness in not only breaking the cycle of dependence but also in improving alcohol-related sleep disturbances. In a pilot study conducted by Gopinadhan and Balachandran homoeopathic medicine “Arsenic album” in alcohol-dependent patients could develop aversion to alcoholic drinks on addition to reduction in the amount and frequency. Repertory is one of the finest instruments in the hands of homoeopath only when one knows how to use it. We can find many rubrics related to alcoholism in our repertories by various authors.

Therapeutics
ANGELICA – In tincture, five drops, three times daily, produces disgust for liquor.
AVENA SATIVA – it is a valuable remedy in alcoholism where the victim is nervous and sleepless almost to the point of delirium tremens. It is also a useful remedy in the opium and cocaine habits.
QUERCUS E GLANDIBUS – Antidotes effects of alcohol. A remedy for the liquor habit, it stops short at that; but it diminishes the craving and antidotes the alcoholic state.
NUX-VOMICA – is the great anti-alcoholic remedy. It corresponds to the tremor, to the nervous affection, to the headache, to the bad taste. It also corresponds to delirium tremens, where every little noise frightens and the victim finds no rest any place, springs up at night and has frightful visions. The tremor is marked with ugliness and irritability and gastric disturbance. It is the remedy for the acute results of a spree; the morning big head is often large enough for the nux cap, and the “rich brown” taste corresponds beautifully. It is a remedy to be given while the patient is still under the influence of liquor or any of the stages of alcoholism.
RANUNCULUS BULBOSUS – Bad effects of alcohol; delirium tremens. One of the most effective agents for removing the bad effects of alcoholic drinks.
SULPHURIC ACID – This is the remedy for chronic alcoholism. It corresponds to inebriates on their last, who are pale and shriveled and cold, whose stomach will not tolerate the slightest amount of food. They cannot drink water unless it be well whisked. They are quick and hasty in everything, and have a great and constant craving for brandy. It comes in long after Nux vomica, perhaps after keenly and other cures have failed over and over again. It suits the sour breath and vomiting of alcoholic dyspepsia.
STROPHANTHUS – Abolishes the taste for alcohol. Functional disturbances of heart from alcohol, tobacco; tea. Loss of appetite. Nausea with disgust for alcohol. Feels lifted up during sleep.
Few other remedies are Absinthum, Apomorphinum, Arsenic Album, Bryonia Alba, Cannabis Indica, Opium etc.
Conclusion – Homoeopathic treatment of Alcoholism boasts of a much better success along with counselling. Homoeopathic medicines help in de-addiction from alcohol and also help in treating the after effects of alcoholism.
By: Dr K N Nishkala
MD PART – 1 (2019-2020)
Department of Repertory
Father Muller Homoeopathic Medical College
Mangalore, Karnataka Problem statement: Pituitary Macroadenoma is a benign tumour which effects the pituitary gland...