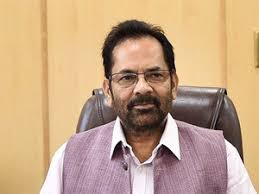 Thiruvananthapuram: Union Minister for Minority Affairs Mukhtar Abbas Naqvi on Thursday said the Centre was for promoting India’s centuries-old medicinal practices which had become a ‘popular, credible and effective health hamper’ for the world.

“India has become a credible ‘Ayurveda & Yoga Hub’ of the world. Along with modern health care, the traditional medicine systems of India, including Ayurveda, Unani, Homoeopathy and Naturopathy are on the priority agenda of the Modi government,” he said while inaugurating the 15th Poojithapeedam Samarpanam celebration and Kumbh Mela at Santhigiri Ashram. The Centre is committed to providing the best and affordable and accessible health care services to all, said the minister. “While on one side, our government has been making our health services reach a global level, on the other hand, we are also encouraging and promoting centuries-old medicine practices such as Unani, Homoeopathy and Naturopathy,’’ he said.

Stating the government had taken all steps for promoting and making the people aware of the ancient medicine system, he said the Centre had in 2014 formed a separate AYUSH (Ayurveda, Yoga and Naturopathy, Unani, Siddha and Homoeopathy) Ministry for the development of education and research in those streams of treatment. The creation of a separate ministry has helped in utilising the huge workforce of doctors and other related professionals. The strategy of adopting the latest medical system and promoting traditional medical practices will help in improving health services in the country, he said. Further, he said the government had launched ‘Ayushman Bharat Scheme’, which is the world’s largest government health insurance scheme covering more than 10 crore poor families.

Moreover, it was a revolutionary step from the government to have fixed the ceiling prices of coronary stents helping provide affordable, quality, heart-related healthcare for all. This has led to the cost of stents coming down by about 380 per cent, he added.

Stating the people being attracted towards these traditional medical systems in large numbers, Naqvi said organisations like Santhigiri Ashram are promoting such health practices, which is a laudable effort.