Introduction: Polycystic ovary syndrome (PCOS) is a disease in which there is an abnormal amount of androgen production in the body along with multiple cysts in the ovaries. The prevalence rate is approximately 6% (according to National Institute of Health Consensus 1990) to 20% (according to Rotterdam 2003 ) in women of the reproductive age group. Aetiology: Excessive secretion of androgens is the main cause. Clinical features: Irregular menstrual periods, hirsutism, acne and obesity are the common clinical features. Treatment: Lifestyle management and medications like contraceptive pills and metformin are commonly used.  However, in homoeopathy symptom similarity is the core basis of prescription, thus a lot of medicines are available for the treatment of this disease.

Polycystic ovary syndrome (PCOS) is a condition in which the ovaries produce abnormal amounts of androgens, male sex hormones that are usually present in women in small amounts. The name polycystic ovary syndrome describes the numerous small cysts (fluid-filled sacs) that form in the ovaries. The prevalence rate is approximately 6% (according to National Institute of Health Consensus 1990) to 20% (according to Rotterdam 2003) in women of the reproductive age group.1

The most common sign and symptoms of PCOS include:

After repertorisation of all the common symptoms of PCOS, the following medicines appeared, as shown in figure-1.6

Symptoms of some important homoeopathic remedies:7,8

Too early, too scanty and flow present only in morning with great weakness< morning, indoors and > in open air; menses are regular but scanty and dark and lasting for only one day.

Before menses : There is sadness and weeping; shuddering; foul odour and taste in mouth; tongue is very foul, but cleanses at each period, and returning again when flow ceases; burning, excoriation and smarting in vulva; sensation of distension at genitals.

During menses: Congestion and stinging pains in ovarian region, running around from the back over each hip, there is bearing down pain from uterus.  Tenderness of female parts < touch. Painful stiffness, apparently in uterus; crampy colic with bearing down pains and sensation as if she must cross her legs to keep everything from coming out of vulva; constipation with sensation of a heavy lump in anus ; soreness of perinuem; foetid urine, deposition of clay coloured sediment, which adheres to bottom of vessel. Restlessness and sleeplessness; empty sensation at pit of stomach; drawing pain in abdomen and limbs; palpitation and dyspnoea; spasmodic colic and pressure over sexual organs along with headache, weakness of vision, nausea, hard stool and rigidity of limbs.

After menses: dryness of vulva and vagina, causing a disagreeable sensation when walking; offensive sweat in axilla and soles; flooding during climaxis or pregnancy, fifth and seventh month; there is much pain and weakness in small of back.

Menses are irregular too early and too feeble, or too late and too scanty, of brownish coloured blood. Dysmenorrhoea with pains extending to left chest; labour like abdominal pains, extending into thighs.  Ovaritis; ovaries are enlarged and indurated; lancinating pains. Ill effects of repressed sexual desire or suppressed menses or from excessive indulgence. Breasts enlarge and become hard and painful before and during menses. Induration of cervix and os is present.  Rash before menses. Itching around the pudenda. Unready conception (sterility) is present.

Before menses: Face becomes pale. There is pain in abdomen and also small of back. No appetite. At commencement there are cholera like symptoms.

During menses: she is very sad and fatigued, especially in thighs with yawning, toothache, pain in small of back and chilliness. Menstrual flow increases at night, it is blackish, in clots, passing off with spasmodic pains in abdomen and hard stools. Menses are profuse and acrid, these make thighs sore and causes burning pain; too late, scanty and short, always accompanied by frontal headache; very nervous and restless; exhaustion with defective reaction; there is sleeplessness during menses; diarrhoea before and during menses; there is blood from rectum during menses.

A good medicine for Cysto- ovarium. There is inflammation with pain in left ovary. Pain extends through left iliac region into groin and sometimes into left leg. <from walking or riding, so she has to lie down (during menses); burning pain in ovary, ovarian affections are worse during menses. Menses are scanty and retarded.

There is amenorrhea. Menses are suppressed from wet feet, nervous debility or chlorosis. Tardy menses. Too late, scanty, thick, dark, clotted, changeable, and intermittent flow. There is chilliness, nausea with a downward pressure and pain. Diarrhoea during or after menses.

Menses are too late; too long lasting and are too profuse. Vagina is dry. Burning and stinging pain in  ovaries, > by urination. Sharp, shooting pains extending from right to left ovarian region. Dryness of vagina. Painful coition. Discharge of blood from genitals, during stool.

Ovaritis with burning, lancinating pains, as if hot coals were burning the part, accompanied by throbbing, >from hot application and much < by cold; restlessness, somewhat relieved by constantly moving the feet; burning pain in back while lying quietly on it; drawing, stitching pain starts from right ovary goes and into thigh.

Menses are scanty and they last for only a day. Before menses there is toothache, colic and leucorrhoea. During menses there is a cutting and pinching type of pain in abdomen; bruised pain in small of back. This remedy is especially suitable to dwarfism women with scanty menses and troublesome weight about the pubis, in any direction. 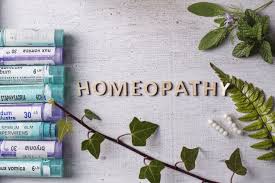