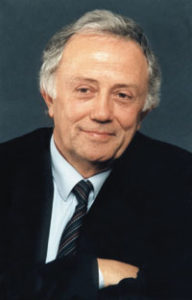 About Dr. George Vithoulkas
Dr George vithoulkas needs no introduction. He is a renounced practitioner, a distinguished scholar and teacher with an experience of more than half a century in Homoeopathy. He is the man who has been honored with Right Livelihood Award (also known as Alternative Nobel Prize, www.rightlivelihood.org) “…for his outstanding contribution to the revival of homoeopathic knowledge and the training of homoeopaths to the highest standards”1 in 1996. in the year 2000, he was honoured with the Gold Medal of the Hungarian Republic, by the country’s President, Arpad Goncz, for his work in the homoeopathic medicine2 and in the same year he was also awarded by the minister of Health in india with the Gold Medal as the “Homoeopath of the Millennium”. in 2012, he was honored with the Honorary Award of National Medical Academy of Postgraduate Education in Ukraine named after P.L. Shupyk”
today, dr vithoulkas is the Honorary Professor at various universities such as University of the Aegean (Greece); moscow medical Academy; state medical University of Chuvash republic (russia); Kiev medical Academy (PHee); dnipro medical institute of Complementary and Alternative medicine (Ukraine) and many more. in 1995, Prof. George vithoulkas established the International Academy of Classical Homeopathy in Alonissos, Greece, where he serves as Head of educational department (educator) sharing the knowledge gleaned from 55 years of his experience and teaches his most current theories regarding levels of health. Fifteen thousand (15,000) medical doctors and homoeopathic practitioners from sixty-two (62) countries have been trained here.
He is also a distinguished scholar who has been called to present at various international and european Organisations. in 1980, dr George vithoulkas was invited by the World Health Organization to write the first article on homoeopathy for the book, Traditional Medicine, published by WHO, as well as the main article in the round table discussion for WHO’s scientific magazine, the World Health Forum3 journal. in 1996, he was invited by the European Parliament to explain the position of homoeopathy, after which the european Parliament voted in favour of homoeopathy. in 1999, he was requested by the Council of Europe to make a day- long presentation before the social, Health and Family Affairs Committee. in 2008, he was invited as an honorary speaker at the “2nd World Congress on Controversies in Neurology (CONy)”.
He also has several books and articles under his authorship. Few popular ones have been named here: Talks on Classical Homeopathy, Homeopathy-Medicine of the New Man (1st edition 1970 by Arco UsA, 21 editions after this), Homeopathy-Medicine for the New Millennium, The Science of Homeopathy and its second volume The Levels of Health, A New Model for Health and Disease, Essence of Materia Medica. From the desk of Dr Kavitha Kukunoor:“Thank you so much Manish Jain for the beautiful...