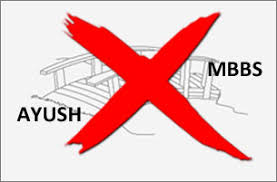 A parliamentary committee has said that the ‘bridge course’, proposed in the National Medical Commission (NMC) Bill, to allow homeopaths, ayurveds and yogis to practice allopathy should not be made a mandatory provision. It added that the decision should be left to the states.

The bill that proposed this bridge course for AYUSH practitioners was sent to the parliamentary standing committee on 2 January after doctors went on protest strike across the country.

The committee also recommended penal provisions for those practising medicine without the necessary qualification.

In my opinion, this is completely wrong. Earlier when the states were allowing alternative medical practices to mix with aleopathy, the Centre opposed it. We approached the Centre to take some kind of legal recourse, and this is what they came up with. How can they say we won’t make a harmful practice illegal, the states can if they want. I don’t agree with it at all.

Doctors and experts, including the Indian Medical Association (IMA), said that such a course would promote quackery.

It takes years of study and discipline to become a doctor of modern medicine. A six month crash course just cannot be enough.

The Ministry of Health and Family Welfare had said the NMC Bill seeks to address the “acute shortage” of healthcare personnel by facilitating trained AYUSH practitioners to expand their skill sets through this bridge course and provide preventive allopathic care.

The panel said that every state has different healthcare challenges and based on them the state governments may implement appropriate measures to enhance the capacity of existing healthcare professionals including AYUSH practitioners, BSc (Nursing), BDS, BPharma and others.

According to a PTI report, various states such as Maharashtra, Assam, Uttarakhand, Haryana, Karnataka and Uttar Pradesh have already amended their laws and permitted AYUSH professionals to practice modern systems of medicine.

The Bill also seeks to replace the Medical Council of India (MCI) as the chief medical education regulator with the National Medical Commission.

While the current MCI has faced several charges of corruption and mismanagement, experts said the solution offered will be no different.

The doctors will not be allowed to elect their own representatives. The NMC, unlike the current Medical Council of India, will be run by people appointed by the Centre and the states.

The IMA said the move will “cripple” the functioning of the medical profession by making it completely answerable to the bureaucracy and non-medical administrators. It will also give greater control to the government to run the commission.

To oppose this Bill, the IMA even started a month-long initiative to raise awareness about issues being faced by medical professionals, which will culminate with a ‘Doctors’ Mahapanchayat’ at New Delhi on 25 March. After 17 days of college lock down, the homeopathy students of Swahid Jadav Nath Homeopathic...

NEW DELHI:  Central Board of Secondary Education (CBSE) has declared the CBSE NEET results on...