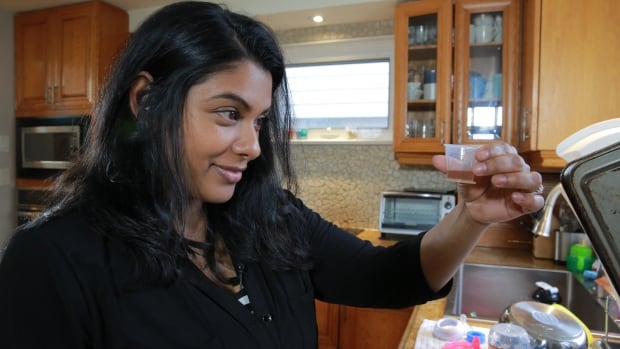 Shannon Hutchinson of Brampton, Ont., recently purchased a popular homeopathic cough product for her one-year-old daughter. She said she had no idea such products don’t require the same level of scientific evidence as over-the-counter drugs to show they’re effective. (David Macintosh/CBC)

Two years after Marketplace exposed how Health Canada was approving homeopathic children’s remedies that promise relief without any scientific evidence to back up the claims on their labels, the government’s promised crackdown is difficult to spot on drugstore shelves.
In the episode that aired in March 2015, CBC journalists created a fever and pain remedy for children called Nighton (an anagram for “nothing”). They applied for a Health Canada licence using only a few photocopied pages from a homeopathic reference book printed in 1902 to prove the product would provide effective relief for fever, pain and inflammation in children.
That was all it took for Health Canada to approve those claims for Nighton’s label.
Health Canada licensing of natural remedies ‘a joke’

Under fire following the broadcast, Health Canada issued a safety alert advising consumers it was introducing new labelling rules for certain homeopathic products targeted to children.
“Health Canada is no longer allowing companies to make specific health claims … for cough, cold, and flu for children 12 and under, unless those claims are supported by scientific evidence.”
Health Canada said it was making the change since the “current labelling on some products may not provide Canadians with the information they need to make informed choices.”
Health Canada licensing of natural remedies ‘a joke,’ doctor says
Homeopathy lacks ‘reliable evidence,’ Australian review concludesBut two years later, little has changed.
Manufacturers were given until March 31, 2017, to ensure their labels meet the new standard. But an informal Marketplace survey of several drugstores in Toronto and Vancouver conducted in the last week of April found only one of the four most prominent brands (Hyland’s, Homeocan, Similasan and Boiron) has done so.
Many products are still making the same old promises — all with Health Canada’s stamp of approval on their label.
And the messages on the one brand that has been changed — Boiron’s Stodal cough product for kids — don’t reflect what Health Canada initially promised. Marketplace has learned that following its safety advisory, Health Canada consulted with the homeopathic industry to come up with the new rules.

CBC News obtained a letter the Canadian Homeopathic Pharmaceutical Association sent six months ago to Manon Bombardier, Health Canada’s director general of the Natural and Nonprescription Health Products Directorate, which lays out the association’s concerns over new labelling requirements as well as its communication with Health Canada and the changes to which it says both sides agreed.
According to the new rules, certain products for children under 12 can still indicate the remedy’s intended use, such as for cough, cold or flu, but cannot feature words such as “relief” and “effective.” They’re also expected to include the following notice: “This claim is based on traditional homeopathic references and not modern scientific evidence.” 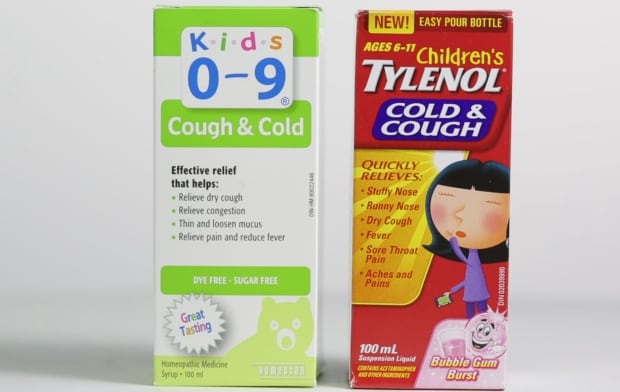 Homeopathic, left, and conventional, right, children’s cough and cold remedies often appear in the same section of the drugstore. (CBC)

Products that claim to provide relief for fever are actually exempt from the new labelling requirements, but all labels must include a warning statement, such as: “If fever or symptoms persist or worsen, consult a health-care practitioner.”
The association’s letter to Health Canada says both sides agreed the “addition of information to pediatric HM labels,” such as the note that products aren’t based on modern science, “would be preferable to removal of information as had been proposed on July 31, 2015,” such as deleting of claims. 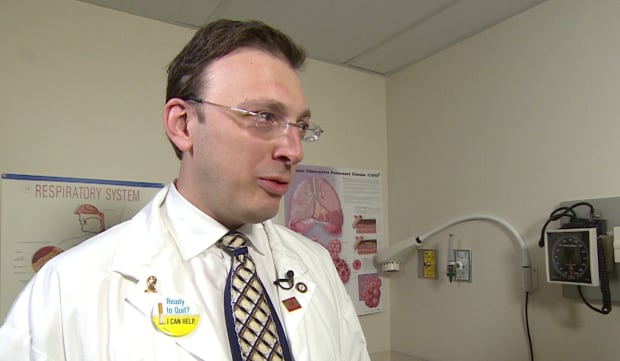 Respirologist Dr. Matthew Stanbrook says there needs to be a ‘better separation between science-based products and products that are not based on science.’ (CBC)

Respirologist Dr. Matthew Stanbrook of Toronto Western Hospital, who participated in the original Marketplace story, says the label changes are “substantially less than the government led the public to believe was happening.”
“And these are sort of half measures that the government’s taken in response to public outcry. They don’t go far enough,” he said. “We need a better separation between science-based products and products that are not based on science.”

He said the exemption of products promising fever relief is a particularly “serious concern.”
“A fever can indicate a serious infection that needs medical treatment or you can get very sick or die, which of course happens sometimes.” 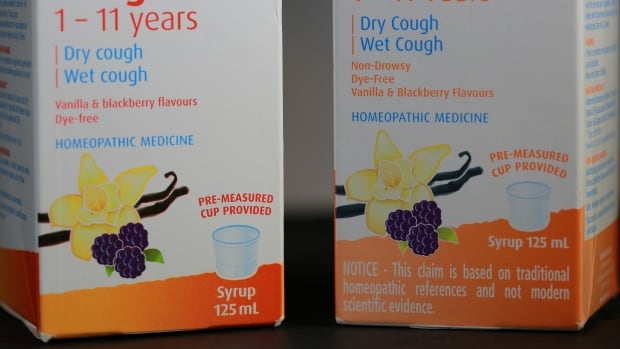 The old packaging of Stodal cough remedy by Boiron, left, and the new version, which states that the claim on the label is not based on ‘modern scientific evidence,’ in accordance with Health Canada’s new labelling rules. (CBC)

Stanbrook reviewed the label on Stodal Cough by Boiron, the one brand Marketplace could find that’s following the new rules.
“You’ve got small print at the bottom that most people probably wouldn’t see. You know, the biggest text on this is ‘cough.’ This is for cough. And so the average person will probably see nothing more than this relieves cough,” he said.
“For the average person just looking for a cough syrup, there’s no way of telling the difference between this and dextromethorphan, which is a real drug. So still a problem.”
Many consumers are unaware that homeopathic products are different from other natural health products and over-the-counter drugs. A Health Canada survey conducted in July 2016 found 95 per cent of Canadians were unable to correctly identify what homeopathy means — the use of minute doses of substances that cause illness to treat illness. 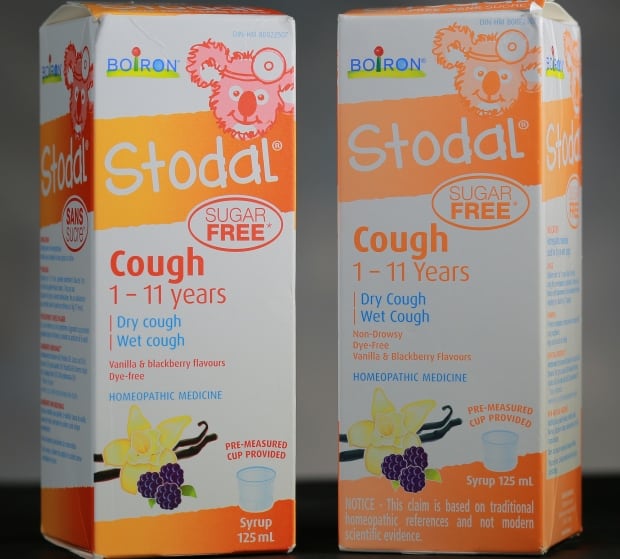 When CBC checked several drugstores in Vancouver and Toronto in the last week of April, it found that Boiron was one of the companies that had changed its children’s cough syrup labelling, but some other brands had not yet made the change, which was supposed to have been in place by end of March. (CBC)

The same survey found that two-thirds of Canadians believe products that promise to do the same thing as over-the-counter pharmaceutical drugs need the same level of proof from the manufacturer to support their claim.
Shannon Hutchinson of Brampton, Ont., recently purchased a popular homeopathic cough product for her one-year-old daughter. She said she chose it because she prefers “all natural” products but had no idea homeopathic remedies don’t require the same level of scientific evidence as over-the-counter drugs to show they’re effective.
“I would think that they’re both same if they’re both being sold in the same section,” she said. 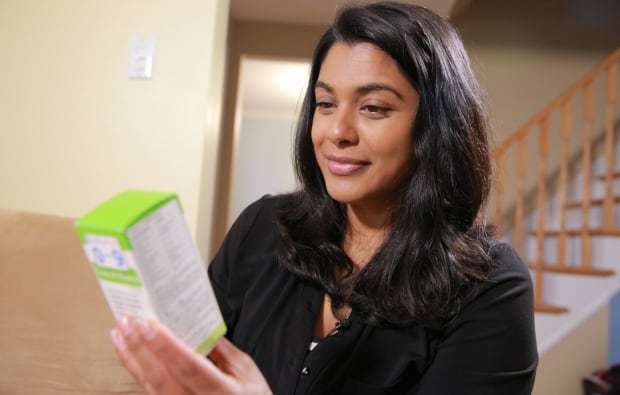 Hutchinson says she found Homeocan’s cough product for kids in the same section of her local drugstore as other children’s cough medicine and assumed they were equally effective. (David Macintosh/CBC)

Health Canada stands by its new rules.
“Yes, we worked with industry to make the change to the labels and we’ve achieved 98 per cent compliance,” Bombardier said. “So in this case, I think it’s a success story, in terms of achieving the results for Canadians to improve their awareness of what they’re purchasing.”
As for the results of Marketplace’s informal drugstore survey, Bombardier said Health Canada doesn’t review the products on store shelves.
“We rely on evidence support provided by industry, and if we have information coming from consumers or any other parties that some of these products on the shelves are non-compliant, we want to have that information.”

The top lobbyist for the homeopathic association is Phil Waddington, who actually held Bombardier’s job at Health Canada from 2000 to 2008.
He says “it’s been a positive experience … on both sides of the regulatory table.”
“The labelling change is a voluntary measure that the manufacturers agreed to because, again, they believed that it’s good to get the information into the hands of the consumers.”
The manufacturers say the new labels are on the way, and will be on the shelves when the old stock runs out.
Source: By Tiffany Foxcroft, CBC News Posted: May 09, 2017 5:00 AM ET Last Updated: May 09, 2017 5:00 AM