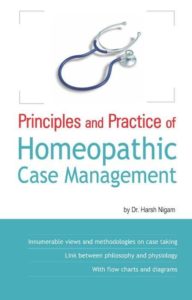 It may seem paradoxical that the science of homeopathy is established and developed by the allopathic physicians. It is no wonder that the scientific and logistic discipline of homeopathy lured some wise allopathic physicians to investigate homeopathy and find the truthfulness of it. The history is before all that not only did they become the ardent followers of homoeopathy but also contributed a lot for scientific propagation of homeopathy.
This work by Dr. Harsh Nigam, who passed out as MBBS and M.D. in allopathic medicine but trained psychologically by his famous father homeopath, falls in the same line. This book amply demonstrates that Dr Harsh Nigam has imbibed and assimilated the philosophy and
practice of homeopathy in an adequate way.

The author has divided the book into nine sections

Section I — Opens with philosophical precepts of Hahnemann, the highest being the aim of a physician and
it ends with the plan that Hahnemann lays down for those physicians who have taken up Hahnemann’s challenge of
being unprejudiced, dynamic practitioner of medical art. Here the author provides skeleton of Organon of
Medicine. The author has taken adequate pains to categorize the philosophical aspects under respective aphorisms.

Section II — Deals with Human form where the author focuses on the genesis of a human being. He begins with
the Vedic concept of human form. The five principal elements – Earth, Water, Fire, Air and Ether are proposed by the Sankhya school of philosophy, while Nyaya-vaisheshika school of philosophy state that the universe is made of nine substances. They add space, time mind & soul to the list of five principal elements. The author also mentions three attributes – Satva, Rajas and Tamas. The flow chart of the author is self-explanatory.
It is interesting to see how Vedic Rishis give the five layers of a human being.
1. Outermost layer: Comprises physical or gross body which is sustained by food and it results from
Tamoguna and is dominated by inertia.
2. Second Layer: Is called Secretomotor layer which consists of subtle body with five faculty of senses
and five vital powers. It results from Rajoguna & is dominated by power of action.
3. Third layer: Is called the layer of mind. It consists of mind and results from Satvaguna. It is dominated by
cognition.
4. Fourth layer: Is of intellect. It consists of five faculty of senses of intellect. It is produced by Satvaguna
and mixed with Rajoguna. It is dominated by will.
5. Fifth layer: The innermost layer is the layer of bodyless existence. It is produced by Satvaguma & is
dominated by bliss.
Then the author provides Vedic concept of mind and explains the age – old concept of Chakras and the breath
of life i.e. ‘Prana’. After delivering Greek and Paracelsic concept of human from, the author enters into
Homeopathic concept of human form by Hahnemann, Kent and Steiner. An interesting contribution of author in
this book is “Nigam’s Layer and Level concept of Human from.” The readers must ponder over the author’s concept
of layers and levels.

The author has explained each layer in detail. Nigam’s levels of human form are as follows. The author tries to put up interesting co-relation between Homeopathic Materia Medica and his concept of layers and levels. It seems the author has taken the help of Steiner’s work of anthra- posological school and also the work of Dr. Twentyman.
The study of constitution and temperament is basic to understand the patient as a person, also to understand
Materia Medica and Repertory. The author has provided the concepts about constitution, temperament, personality,
emotions and diathesis in a remarkable way.

Section III — The real stuff of homeopathy begins from section three onwards. The author begins with the genesis
of disease and with the sentence “Disease is never a primary fact. It is always a result.” The author then explains
some aphorisms. In this chapter author comments that Hahnemann’s term of one sided disease is end stage
organic disorder. This is, however, debatable. The author proposes four stages of ‘form’ of disease: 1. Disorders of
sensation 2. Disorders of function 3. Stage of organic disorder and 4. End stage disorder. Section IV—Deals with homeopathic concept of a remedy. In this section, the author deals with Homeopathic Materia medica. The author criticizes Coulter, Bailey and Scholten for their fanciful imaginations.

Section V & VI — Direct us to collect information of patient’s disease and what case taking is all about. After
writing some pages on homeopathic pharmacy the author enters into section V and gives ‘Gist before case taking’
where the theoretical stuff is given.

Section VII — Deals with homeopathic therapeutics. The author provides fifteen prescribing methods with
brief account of them. He also gives some useful suggestions about the use of repertory. The ‘Arbari vital
approach’ introduced by R. T. Copper is mentioned by the author, which many people may not be knowing. It
involves prescribing single – drop doses of plant mother tinctures, which have preferably been prepared from fresh
living specimen.

Section VIII — focuses on ‘Homeopathic Posology.’ The author draws references from many sources. This is then
followed by twelve observations of Kent.

Section IX — This last chapter deals with ‘Homeopathic Case Management.’ Here the author provides case taking proforma and some suggestions. The author has tried to amalgamate the data from various sources.
The chief approach of the author, it seems, is to delve into Organon of Medicine and try to explain the philosophy
in modern terms. The author’s approach is scientific and this book will be of definite use to the aspiring students
who want to update themselves about the intricate science of Homeopathy.
In view of the first intelligent baby of the author, we expect many more books by the author esp. his actual cases and their analyses based on his concept of layers and levels.

“The human race can be divided into two groups – the born analyzers and the born synthesizers. A homeopath should be both and if he is only one, he should try and incorporate the qualities of others. In order to do so, he
must know himself.” These words of the author, Dr Harsh Nigam, in the preface of the book, aptly demonstrates the
approach with which he has worked hard to bring forth the pre-Hahnemannian, Hahnemannian and post-
Hahnemmanian pearls wrapped elegantly under the hardcover of holistic philosophy.” Health today, stands at a precarious junction. Over the last century, ‘advances’ in medicine... My Journey in Homeopathy – Review by Dana UllmanBefore discussing the contents of this...