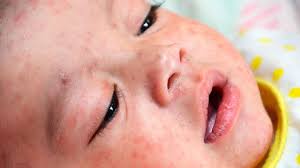 Under the Global Vaccine Action Plan, measles and rubella are targeted for elimination in five WHO Regions by 2020. WHO is the lead technical agency responsible for coordination of immunization and surveillance activities supporting all countries to achieve this goal.

Measles is transmitted via droplets from the nose, mouth or throat of infected persons. Initial symptoms, which usually appear 10–12 days after infection, include high fever, a runny nose, bloodshot eyes, and tiny white spots on the inside of the mouth. Several days later, a rash develops, starting on the face and upper neck and gradually spreading downwards.

Severe measles is more likely among poorly nourished young children, especially those with insufficient vitamin A, or whose immune systems have been weakened by HIV/AIDS or other diseases. The most serious complications include blindness, encephalitis (an infection that causes brain swelling), severe diarrhoea and related dehydration, and severe respiratory infections such as pneumonia.

While global measles deaths have decreased by 84 percent worldwide in recent years — from 550,100 deaths in 2000 to 89,780 in 2016 — measles is still common in many developing countries, particularly in parts of Africa and Asia. An estimated 7 million people were affected by measles in 2016. The overwhelming majority (more than 95%) of measles deaths occur in countries with low per capita incomes and weak health infrastructures.

Homeopathic medicines are often effective in treating measles, though medical attention should also be sought due to the possibility of complications from this disease.

Aconite: Useful at the beginning stages of measles with high fever, a dry barking cough, and red conjunctiva (“pink eye”). The skin burns and itches, and the patient feel restless, anxious, and frightened. They toss and turn.

Apis: In these cases the rash begins but fails to develop fully, and soon disappears, though the child doesn’t feel completely well. Their itching is worse by warmth, and their face and eyelids are puffy.

Belladonna: Useful at the beginning stages of the measles when there is sudden onset of a high fever, reddened face, and throbbing headache. They tend to be drowsy, a little delirious, and have some difficulty falling or staying asleep. Despite the fever, they are not very thirsty.

Bryonia: Useful when the skin eruptions from the measles are delayed. The children have a hard, dry cough and no expectoration. Any motion causes pain. They may experience some mild delirium: the child “wants to go home” even though they are at home.

Euphrasia: These children have a fever and rash as well as acrid tearing of the eyes and a bland nasal discharge. They become sensitive to light. They have a cough, but only during the day.

Gelsemium: For these children the onset of symptoms is slow. They have a fever with great weakness and a sense of heaviness, both of the whole body and specifically the eyelids. They are without thirst.

Pulsatilla: These children experience a mild case of the measles. Their fever is not high, and their symptoms are not too painful. They will, however, have profuse tearing from the eyes and a nasal discharge. They also have a dry cough at night which becomes loose in the daytime. They may have ear inflammation. Although they have a dry mouth, they are without thirst.

Sulphur: The itching over the skin is aggravated by scratching.They have reddened mucous membranes and a great thirst. Their cough and diarrhea are at their worst in the morning.

National Health Mission under the Government of India is making all efforts to contain the disease and a significant success is visible. For sporadic cases, generally, in India children are amenable to be cured by Pulsatilla, Belladonna and Bryonia. Bio-chemic combination of Ferrum phos 6X and Natrum sulph 6X aids in early recovery.