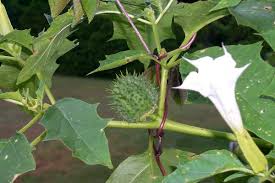 The remedy Stramonium has been the first medicine to treat the insane. Let’s study the mind in detail and treat many more psychopath and the insane.

Stramonium is like an earthquake in violence. They simply switch from rage mode to normal mode, as if nothing happened. They are very controlled and very nice and can be very sweet when they are in consultation room. But then they will say from time to time or when time comes, the fit comes, the anger comes, the violence comes and violence is hitting, striking, killing. It is not the desire to kill, they kill. They have to complete the action of violence. They go ahead and detonate their anger by doing something very violent. They will really take knife and there will be aggression. They hit children, their mother, their father. They will attack, they are tremendously aggressive and violent in their fit of anger.

There is no holding back when Stramonium “loses it.” The rage is quite insane, and accompanied by definite desire to kill. The Stramonium people were not angry most of the time. Rather they would suddenly be prone to bouts of rage with which they would struggle for few hours, and then they will be calm again, or enter a different emotion, such as lust or terror.

Stramonium is the violence of the mental state. It is very active, agitated, driven state. The person is out of control, destructive, even malicious in behaviour. It is destructiveness of all kinds- against other persons or oneself. Striking, biting, tearing, shrieking, cursing- but most specially smashing things. Such a state may erupt rather suddenly, then subside after a while, but the person is not free of it. Typically, it is the chronic mania or relapsing frequently over a period of time, rather than just a simple paroxysm of rage.

It might be indicated in mass killer who suddenly begins killing many people indiscriminately. Stramonium would have to be at least thought of in such cases.

Stramonium individuals are subject to all manner of terrors, delusions and hallucinations and they usually dread the night, because it is that they become haunted by the horrors of their own subconscious mind. They will tell you that they hate sunset, because it heralds the beginning of the dark time.

If you have Stramonium and you sleep in dormitory and you switch off the light in night, even if he is asleep he will awake in terror and will jump to on the lights.

They sleep with lights on, and if they awake in darkened room, they will see monsters in dark and will scream long after their parents have arrived and tried to soothe them.

There is wildness in delirium, they will be more furious and more like a wild animal. It will go to that point. His whole situation including his ailments frighten him so much that he doesn’t want it to ever surface again. He wants to finish it off, to eradicate, to destroy, and exterminate it. His problems trouble and scare him and he wants to finish them. His actions are always total.

They will have a lot of hallucinations and are usually related to frightful things such as animals. They will see dogs, wolves, etc. but they see animals wanting to see them. Usually delusion is related to something dangerous, especially animals, dark or black things. They imagine dark, black things, black ghosts. One of the characteristic fear and delusion is – “always worse on waking.” (Whereas belladonna is usually worse before going to bed.) Stramonium has great fear of darkness and being alone.

Stramonium patients will report that they feel panicky in a moving car if sunlight is flickering in between a row of trees, or through a fence. One woman said she hated to look at sunlight upon water. When I asked why? She said – she said it was “one of those horrible shiny things.”

It is not the desire to kill, they kill. They have to complete the action of violence. Stramonium will really take a knife and will charge and will charge and hit and then you see the aggression. They hit children, the mother, the father. They will attack, they are tremendously aggressive and violent in their fit of anger.

Children usually that develop Stramonium symptoms have been terrified by parents. There is a little one here, 5-year-old and he plays, he does this, they say, “shut up.” He continues. The father grasp him and goes to balcony and says, “I am going to throw you down. So you shall stop. Yes, or no?” great fright and then slowly that child develops symptoms of aggression. Eventually you enter the house it does not matter who you are, he looks at you and goes and hits you.

FEAR OF BEING INJURED

It is very interesting that this violent remedy, which is so violent that it can kill, they themselves are afraid of injured. Either the same person has both the violence.

The mental symptoms are as follows. The mania or delirium is of wild character, the face being of bright red, the eyes have wild and suffused look, although they are not so thoroughly congested as under belladonna. The hallucinations terrify the patient, he sees objects springing up from every corner, animals of every kind and grotesque creatures arise and terrify him. The patient, if child, cries out for his mother even when she is near. The eyes are open and the pupils widely dilated. If an adult, he is decidedly loquacious in his delirium. At times he manifests a merry mood in his loquacity, and at others he has horrors. At one moment he will be laughing, singing, and making faces, and at another moment praying, crying for help etc. he often has photo mania or desire for light. The mania assumes a silly character. The loquacity differs from Lachesis. In Stramonium the loquacity consists of a simple garrulity, whereas in Lachesis it is jumping from one subject to another. During delirium of Stramonium, as under many narcotics the patient frequently attempts to escape.