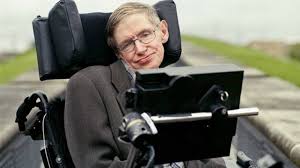 Stephen Hawking (8 January 1942 – 14 March 2018) is an English physicist, cosmologist, author, and Director of Research at the Centre for Theoretical Cosmology within the University of Cambridge. He is the recipient of many awards, medals and prizes and is a part of The Royal Society and a member of the US National Academy of Sciences.

Meaning – Having high IQ and intelligence; Genius. They have a very acute memory.

When he was 21, Stephens started tripping; dropping items and his speech became unclear. After a series of tests, doctors concluded that Stephen was suffering from ALS – Amyotrophic Lateral Sclerosis; a disease which paralyzed him and required a speech generating device to communicate

He worked very hard to earn his PhD and even though he is on a wheelchair he communicated with a touch pad computer and a voice synthesizer. Stephen Hawking can’t do many activities, so he always thinks about random things; and this is where many of his theories come from.

Meaning – state of mind to face any danger situation, marked by bold resolution during difficult situation

ABSTRACT: Varicocele is the most common cause of infertility in men, the effect of a varicocele... Abstract: Education is the most powerful weapon which you can use to change the world- Nelson...