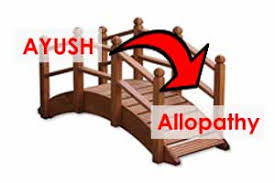 More than 25 years of analytical and practical medical experience of practicing Integrated medicine assessing the pros and cons of conventional (Allopathy) and Non-conventional medicine (my specialty Homoeopathy), has not only equipped me in understanding the limits and possibilities of Homoeopathy it has also convinced with absolute need of rationalization of conventional medicine.
The challenges (Ethical, Educational, Practical, and Economical) related to medical sector are humongous and not within the scope of the present article.
With change of guard in India in 2014 under the current BJP leadership, dynamic systemic changes of flawed mechanisms of the past were highlighted and sweeping changes are underway in Economy, Defense et-al. A need for paradigm shift in Healthcare was envisioned by PM NarendraModi.  The will to change Healthcare system in India for the welfare of the public has led to National medical commission (NMC) bill, 2017
There are many points which are hotly debated within and outside medical community regarding NMC 2017. Bridge course is one such issue which has both conventional (Allopathic) and non-conventional (ISM & Homoeopathic) medical practitioners are up in arms against each other.The issue being discussed here is the ‘Bridge Course’, a nine month course for AYUSH doctors. (AYUSH Doctors is an ethnic term of Indian origin such Doctors are known as Non-Conventional Doctors worldwide). This nine month course is expected to equip them in conventional Allopathic pharmacology enough to prescribe allopathic medicines to the patients. The basic idea is to fulfill the shortage of doctors in PCH’S (Primary Health Centre).
This view is in accordance to National Health Policy (2002) which admits that a vast reservoir of practitioners in the Indian system of medicine (ISM) & Homoeopathy, who have undergone formal training in their own disciplines has been underutilized in National Healthcare. The policy, in order to increase the reach of Basic Health Care in the country, recommends for using such (AYUSH Doctors) in the implementation of State/Central Government Public Health programs. The policy further recommends for practice of simple services/ procedures by such practitioners even outside their disciplines, as part of the basic primary Health services in underserved area (NHP 2002 4.51.1).
In 2012 A report of committee on empowering of AYUSH recommends: Limited use of modern medicines be permitted to AYUSH practitioners to manage medical & surgical emergencies. On 19th March 2013; a report was presented in Rajya Sabha and laid on table in Lok Sabha. Titled 65th Report: The proposal to introduce the Bachelor of Science (community Health) course by the department related parliamentary standing committee on health and family welfare. The basic premise was to empower non-conventional Doctors and even the Nursing staff with a B.Sc course which would help fulfill the shortfall of conventional Doctors in PHC’s.
I quote the recommendations of the above mentioned 65th Report:

The concept of a Bridge Course it seems is a strategy developed by policymakers of NMC 2017 based on the idea of 65th Report.
Bridge Course: Core arguments and solution
According to PTI:  29 Dec 2017, The AYUSH ministry in consultation with NITI Aayog has formulated the inclusion of integrative medicine in the proposed Bill which will enable AYUSH practitioners to practice modern medicine and vice versa after undergoing a bridge course. Proposed by NITI Aayog – led panel, the draft bill known as National Commission for Indian system of medicine and Homoeopathy, which seeks to replace central council of Indian medicine (CCIM) and central Council of Homoeopathy (CCH), also calls for AYUSH National teachers eligibility lest to bring in quality teachers in traditional system of medicine. As per the PTI report, further from upcoming academic session, it will be mandatory for those seeking admission in AYUSH – UG courses to clear the NEET. The official said the proposed bridge course of 9 months for AYUSH Doctors will make them eligible to practice conventional medicine i.e. Allopathic medicine.

I am fully convinced that it is a policy conceived with a positive intent but we must realize that practically what would happen is that AYUSH Doctors who would do the Bridge Course will either not join PHC or Join it but do private practice in cities and in the city too. Such Bridge AYUSH Doctors would be using Allopathic medicines more than Ayurveda or Homoeopathy or whatever their core specialty is, why? Because it is more lucrative and remember those who would opt for the bridge Course in the first place would be those AYUSH Doctors who were not satisfied and happy with the skills they studied to acquire for approximately 6 years. So what can be a solution in such a scenario?
I would wish a rider to accompany such a Bridge Course let the AYUSH Doctor sign a bond of 10 years to provide services to the remotest PHC in his state and if found guilty of not honoring this bond the AYUSH Doctor must face criminal charges akin to PCPNTD Act. On the positive side such AYUSH Doctors posted in PHC’s should be paid a salary as per Pay Commission
Another minority scenario develops with the bridge course and I bet it would, where Conventional Doctor (MBBS) would like to do a bridge course in an AYUSH stream (Ayurveda/ Homoeopathy etc.) to practice non-conventional medicine. Now this would be a win-win situation, such Bridge MBBS Doctor empowered with AYUSH stream of his choice can be utilized by the state to improve quality of education of AYUSH institution and in such a case the candidate must sign a bond to impart education to the AYUSH institution in his area for 10 years, for which he should be paid as per Pay Commission.
In the end it must be remembered and must be highlighted that the competence level of AYUSH Doctor who would complete 9 month Bridge Course and prescribe Allopathic medicine would never be at par with MBBS Doctor’s prescription, but none the less such an AYUSH Doctor improved with Bridge Course would be better than a quack (Jhola-chaap) so rampant in remote villages in India.
Author: Dr. Harsh Nigam, MBBS; MD (Physiology); MF (Homoeopathy)
The writer is an Author and practicing medical Homoeopath of more than 25 years of experience