It was during his residence at Konigslutter, in 1796, that Hahnemann first communicated to the world by means of the public print his new discovery in medicine.
In 1795 Hufeland, renowned in all Germany, began to publish in Jena, a medical journal called, Journal der practischen Arzneykunde und Wundarzneykunst.
Hahnemann and Hufeland were personal friends ; Hufeland was at the time professor of physics at Jena.
Hahnemann is quoted in the first volume ; his cure of Klockenbring is mentioned in the second volume.

First essay on the curative power of drugs

In this journal, volume two, parts three and four, (1796), Hahnemann published the article entitled : “Essay on a New Principle for Ascertaining the Curative Powers of Drugs.”
In this he reviews the condition of medicine at that time ; argues that chemistry is not the proper exponent of the curative action of drugs ; that the experimentation on animals with poisons is of little use since many plants deadly to man are innocuous to animals ; that the true method of experimentation with drugs is by testing them on the healthy body ; says that the so-called specifics in common use are but the result of empirical practice, that the pure action of each drug should be obtained on the human body by itself.
He presents his theory in the following words :
“ Every powerful medicinal substance produces in the human body a kind of peculiar disease; the more powerful the medicine, the more peculiar, marked and violent the disease.
We should imitate nature which sometimes cures a chronic disease by super adding another, and employ in the (especially chronic) disease we wish to cure that medicine which is able to produce another very similar artificial disease, and the former will be cured ; similia similibus.”
Hahnemann very carefully argues the question of the new law, – he adduces many results of poisonings by drugs, gives his experience in the uses of medicines prescribed according to the law of similars, and records the symptoms that certain medicines produced on himself and others.
He brings example for every assertion and discusses the matter in a calm and convincing manner.
This essay can be found in the various editions of the ” Lesser Writings ” of Hahnemann. To quote :
“It displays to full advantage the exceeding gentleness of Hahnemann’s temper, the respect he entertained for the opinions of his professional brethren, the modesty of the estimation in which he held his own, ( ” Lesser Writings,” New York, 1852, p. 249) and the philosophical and comprehensive grasp of his mind. Its tone was calm and impartial, its language clear and accurate, its reasoning convincing, its arguments forcible, and its assertions moderate. It bears no sign of prejudice, much less of acrimony.
We think its scientific mastery of a question confessedly among the most vexed in medicine, the best answer to those who glibly charge its author with charlatanry and ignorance.
Let them answer Hahnemann’s arguments, which they have never done, before they abuse himself.” (Hom. World. Vol. X, p. 334)

It was the first essay by Hahnemann that appeared in Hufelands Journal.
After this he was a frequent contributor until 1808, the last article being about a prophylactic for scarlet fever. In 1797 he published a cure of a case of colicodynia after the usual means of cure had failed, by means of a medicine producing very similar morbid symptoms. (Veratrum album.)

His next article was :

“Are the Obstacles to Certainty and Simplicity in Practical Medicine Insurmountable ?”
In it he argues in favor of simple, careful methods.
He says : (Lesser Writings,” New York, 1852, p. 320.)
” Why should we complain that our science is obscure and intricate when we ourselves are the producers of this obscurity and intricacy ? Formerly I was infected with this fever ; the schools had infected me.
The virus clung more obstinately to me before it came to a critical expulsion than ever did the virus of any other mental disease. Are we in earnest with our art ?
“Then let us make a brotherly compact, and all agree to give but one single simple remedy at a time for every single disease, without making much alteration in the mode of life of our patients, and then let us use our eyes to see what effect this or that medicine has, how it does good or how it fails. Is not this as simple a way of getting over the difficulty as that of Columbus with the egg ?”
At this time Hahnemann was habitually depending on the single remedy, and says in this essay that it has been a long time since he has given more than one remedy at one time. He also prescribed according to the law of similars.
He was in the habit of preparing and dispensing his own medicines independent of the apothecaries. By all his writings at this time he endeavored to induce his professional brethren to try the plan of simple remedies given according to a precise law.
But it was in vain, they became jealous of his success, for he was now engaged in active practice.

“And the physicians of Konigslutter incited the apothecaries to bring an action against him. for interfering with them in dispensing his own medicines.
He appealed to the letter of the law regulating the business of the apothecary, and argued that they had the sole privilege of compounding medicines, but that any man, especially any medical man, had a right to either give or sell uncompounded drugs, which were the only things he employed, and which he also administered gratuitously.
But it was in vain, and Hahnemann, a past master of pharmaceutical art, was forbidden to dispense his simple medicines.” (Dudgeon’s Biography, 1852.)
And now he must again think of leaving his home and finding a new one where he could practice his methods and experiment in peace.
In a letter written to a patient, and dated March 14, 1799, he says : (Monthly Hom. Review, Vol. 31, p. 617.) 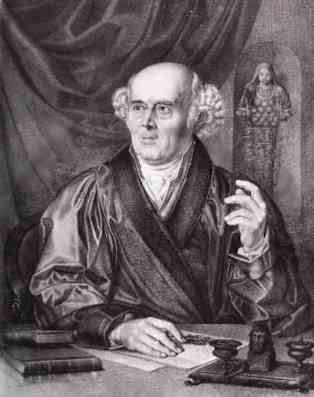 “To-day I make you my confidant. Kindly give the enclosed letter as soon as you can to the Minister Von Frankenberg, if he is still alive, but if Zigesar is in his place give it to him, but before doing so have the goodness to write the name of the present First Minister in Latin characters : on the envelope in the blank space.
I was not quite sure if Frankenberg is still living, otherwise I would have written his name myself. I am applying in this letter for Dr. Buchners post with the Duke, and would like to return to Gotha in that capacity, for I have always preferred Gotha to Brunswick.
But it is impossible for me to, have an excuse for changing my abode unless I get an appointment of this sort.
” But do not let anyone know a word about all this, in order that no intrigues may be set on foot, as would certainly happen. But how will you manage to get this letter at once and with certainty into Frankenberg’s hands ?
As it is, the news of Buchner’s death reached me a week than it ought, so I must now lose no time. Forgive me for the trouble I am putting you to, and with best wishes I remain
Your most devoted servant,
Dr. Hahnemann.”
The Dr. Buchner whom he mentions was the former physician in ordinary to the Duke, and had died a month before this. It can plainly be understood that Hahnemann thought that could he become physician to the Duke of Gotha he would be in a great measure freed from the persecution of the jealous physicians and apothecaries. But this appointment he failed to procure.

Secrets And Facts of Evolution of Miasms & Homoeopathy